Facebook Curbs Clickbait...and What Happened Next Will Shock You

Clickbait may seem completely harmless, but Facebook has had enough of it. In order to create a better user experience, Facebook will be initiating a new algorithm that will “de-prioritize posts with headlines that exaggerate the article to create misleading expectations.” (The Guardian)

This algorithm works similar to how email accounts filter out spam mail or mail containing viruses. Any article with a clickbait type of headline (like the one in this title), or publishers who consistently use clickbait, will be put towards the end of a person’s newsfeed lowering their visibility. Facebook is adamant about this algorithm because the happier users are with its platform, the more likely they are to return to the site.

Facebook’s new algorithm will not just look at the headline to determine clickbait. They will also look at the time spent on a page and the ratio of people interacting with the content. They will calculate how long a person stays on a page after they click the link. If the user returns to Facebook rather quickly, it’s safe to assume that they did not find anything of value on the other page so a red flag may appear to monitor the publisher’s other works as well. In addition, Facebook will see how many times someone either shares, likes, or comments on a piece of content. If no one is sharing the content, there must be a reason for it, and the publisher is once again monitored (Facebook Newsroom).

This Facebook update hasn’t been brought up without criticism following it. The argument is that with just the algorithm, publishers won’t know that their articles are being deemed as clickbait, so they won’t know of the problem they have to fix. In turn, publishers feel that Facebook should simply rewrite the headlines if they feel it’s clickbait, or have users be able to flag an article as clickbait after reading it. Facebook has said they will not be doing either of the suggestions, and said that publishers “may not be able to tell which articles were downgraded, or why,” (Vox Technology). This has seriously heightened the anxiety of publishers who rely so heavily on Facebook to push traffic to their site. It’s also increased the competition among other social media outlets, in hopes that not all media sites will house an algorithm to penalize their clickbait tactics.

It’s important to remember that Facebook is always coming up with new algorithms and tweaking the ones they already have, without any notice or information to publishers. At any given point, your content could be knocked down a few pegs on the newsfeed, if not removed completely. A backup plan has to always be set up in order for your message to reach the audience. If tomorrow the world of cyberspace decides to end ad platforms, how stuck would your company be?

What It Means for Your Company

Facebook wants only the best experience for their users. Clickbait is considered dishonest and could ruin that user's experience. For a company that wants to generate clicks to their page and relied heavily on their clickbait tactics via Facebook, what does this mean? Well in simple terms—it means you have to step your game up and pay close attention to what you publish.

Brands (and agencies alike) must now generate actual content instead of just an answer to a riddle type of headline. You can no longer rely on the psychology of curiosity in order to get a click. There will no longer be competition with other forms of spam; it will be all legitimate stories, compelling articles, and pure content. Thus, only the strongest piece will survive a chance to even be in the running to win over an audience.

This also means you have to find another way to get your message across to your audience. You need something direct, where there’s no filter. You can ultimately send your message, without it being considered not worthy of being on a website, without any problems. There is absolute creative freedom without having to worry about the potential of being banned from a site. It becomes the brand’s decision as to how they want to market themselves, and solely the brand’s decision. For example, direct mail campaigns can be as outrageous as the brand wants them to be. There are no set limitations once you take your message off of cyberspace; no one is going to tell you no. So whether your message is being completed tastefully or inappropriately, it still winds up in the mailbox of your audience.

In the realm of direct marketing, there are also added benefits: DM allows you to be much more complex when conveying your message. You can leave a “leave behind” or a “take away” with your potential customer/client, and suddenly your printed idea becomes a three-dimensional message that people are truly engaged with. A great example is when Blackberry wanted to get across the message that they provide stress-free communication and sent people a stress ball that looked like a Blackberry telephone. 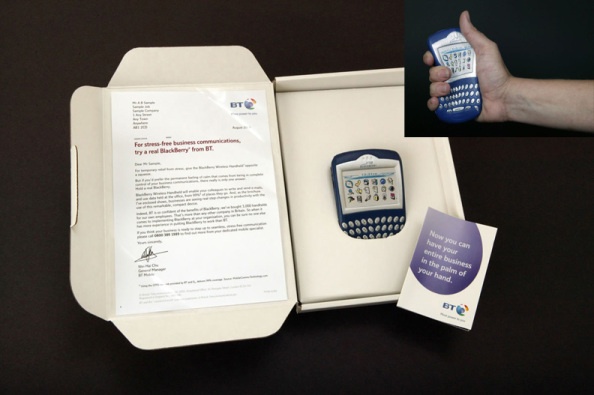 via The New Lead

As one of the best ad platforms in the digital space for audience targeting, Facebook will continue to test and tweak algorithms that engage users (and benefit shareholders). And while marketers need to remain fluid in their approach, certain truths remain: you need a clear message, rich content and a transparent campaign in order to achieve response and subsequent sale.