The Definitive Guide to Charity and Nonprofit Direct Mail

In the battle for a generous donor base, charities and nonprofit organizations have a difficult task: to establish and maintain a "cause" that doesn't necessarily result in a tangible exchange between parties. Instead, a donation is seen as a badge, resulting in an altruistic "alignment" of sorts.

And while this may seem like a difficult proposition, the age of data-driven direct mail has given charities and NPOs a proven vehicle for acquisition. From the segmentation capabilities of 4-C variable data printing to the usage of exit scans for complete campaign visibility, charity and nonprofit direct mail is burgeoning—with no signs of slowing down.

Although people say that direct mail is dying, statistics and case studies show otherwise, especially in terms of charity and nonprofit direct marketing. There is research that shows that people who were “initially cultivated through direct mail gave significantly more than those who made a major gift through a personal request or other channels,” (Pursuant). The same study shows that those same donors tend to give several donations throughout their lifetime, whereas donors who were sought out through different channels gave one single gift.

As with all things marketing, it’s key to know your audience. Generally speaking, there are three types of general audiences of charity and nonprofit direct mail:

As a charity, the way and reason you appeal to each generation may be a little different. Each generation gets involved with charities for different reasons. 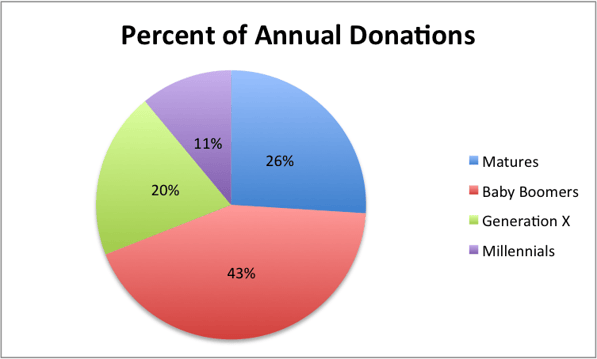 (Calculations in chart gathered from AARP)

This generation consists of people born in 1945 and earlier. They support a few charities, but remain loyal to them throughout their lifetime. They tend to respond well to nonprofit direct mail and in-person interaction. Members of this generation either are not technologically savvy, or don’t trust the Internet enough to make a payment online.

This generation consists of people born between 1946 and 1964. This generation genuinely enjoys volunteering and taking part in leadership roles; and they are responsible for contributing the most donations to majority of charities (AARP).

This generation consists of people born between 1965 and 1980. This generation likes to give, but want it made as easy as possible for them. They like to support through workplace giving as well; meaning they’ll take part in charities that their businesses are involved in. It’s important for them to see how their donations will make a difference to the organization. Therefore, they respond best to nonprofit direct mail that has a website address right to the donation page. It also may be a good idea to have charts and explanations explaining what their donation will do on that landing page.

This generation consists of people born between 1981 and 1995. This generation cares less about which charity they’re donating to, and more about the cause itself. They’re not going to keep donating to the same charity out of loyalty, but they’ll keep donating for a consistent cause. Millennials are invested in making a difference because they feel that they can, so they’re more willing to participate in charities and organizations. This generation is also currently the largest generation on the planet, so it’s important to market to them correctly.

connecting with your audience

Whenever you’re marketing to someone in hopes that they’ll join your charity or organization, it’s critical that you try to reach out and develop a bond with them. After all, this is essentially your goal as a charity—to create a bond that will last a lifetime so that their participation within the charity will also last a lifetime. One way of creating that bond is by including a personal letter to the potential donor (or past donor). When you do that, there are a few things to keep in mind.

No one is going to want to try and decipher the abbreviations within your letter; and no one is going to take time out of their day to look it up. Keeping in mind the idea that people will only have your piece of mail in their hands for 30 seconds or less, you don’t want to waste any of their time skimming to be stuck on initials that you could have easily just typed out.

Don’t make your letter feel like an essay. No one is going to read your piece if it’s structured like a research paper. Remember to also avoid run on sentences, fragments, and exceedingly long paragraphs, as that will automatically deter people from reading the entirety of the piece.

3. appeal to reader's emotions in an understanding way.

Know that some charities may hit closer to home for certain people than for others. So the way you discuss the charity may have to be on the “lighter” side. Don’t harp on all the terrible things that your charity or organization stands against, as that could bring up sad memories for some and they will not continue reading. Instead, focus on all the positives that will come from the participation of this person within your organization and how they can help make a difference.

format of your letter

Among other things your letter should contain: headlines, subheads, images and captions, bold and italicized lines, and most specifically a call to action that should be extremely clear. A call to action (sometimes referred to as the “ask”) should be strong and direct. A good idea is to note the call to action in the beginning of your letter, and then reinforce it once more towards the end. 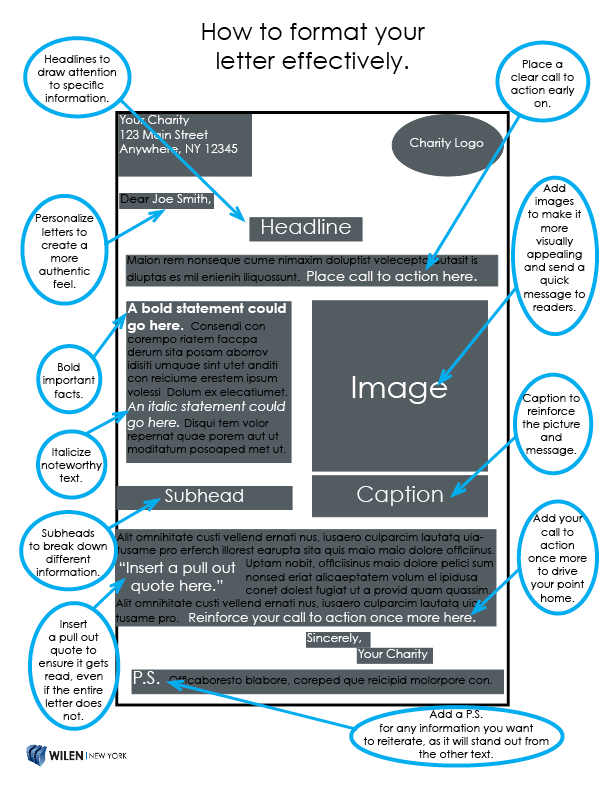 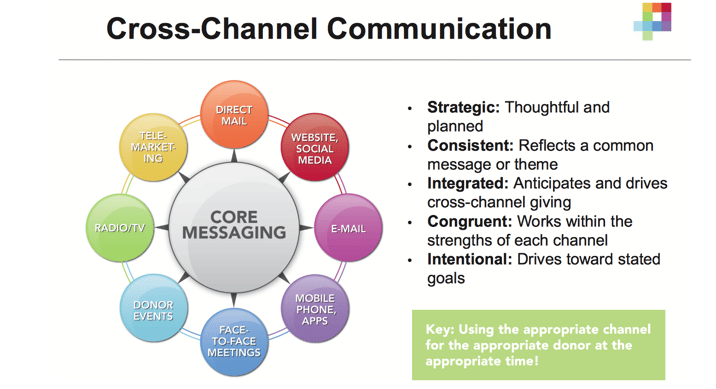 The best way to market to people in this day and age is to interact with your target audience across multiple channels. People develop a better understanding and their curiosity deepens when they are constantly interacting with your brand/charity/organization. So while statistics show that direct mail does in fact work to get the job done, it can work better with increased exposure that comes from being integrated with social media.

Social media is also a great way to start the conversation. Through hashtags, promotional contests, and social media profiles, you can spark a person’s interest and make them want to learn more about your brand/charity/organization. Then, being aware of the name, the stance, and the general background, people are less likely to throw out your direct mailpiece and more inclined to read through.

It can also be beneficial to utilize your social media interactions as a starting point before you even send out the direct mailpiece. You can measure your interactions, trace them to demographics, and then come up with the exact segments that you should mail to. This can help make more out of your marketing budget, while simultaneously being more effective.

Every time you utilize a different platform as an interaction with someone, people should be learning more about your organization’s story. Red Cross is one organization that has managed to carefully integrate their direct mail with social media platforms so that people aren’t reading the same thing more than once, but rather interested to read more.

1. Direct mail is still extremely well-received by the general public, especially when it comes to charities and NPOs.

3. Know your audience and market accordingly; segment based on generational preferences and propensity for direct mail.