Ad blockers continue to be the bane of most online marketers' existence, but a recent announcement from one of the most popular ad blocking services has consumers scratching their heads as well.

An innovation aimed at eliminating intrusive banner/pop-up ads in favor of user experience, ad blockers have been both largely effective and widely adopted—there are 198 million active ad block users around the world. (Page Fair)

In a drastic monetization move, AdBlocker Plus has decided to do the unthinkable—curate and sell ad space they deem “acceptable,” essentially becoming an ad network.

In this post, we’ll highlight the most important implications coming from the AdBlock Plus’s update and boil down four actionable insights for direct marketers hoping to navigate the world of digital paid placement.

In 2006, Wladimir Palant created AdBlock Plus (ABP) for the sole purpose of “blocking annoying ads, disabling tracking and blocking domains known to spread malware,” (Adblock Plus). Users could download the program and then create filtered lists to block whichever elements they chose—malware or tracking, or both. Not surprisingly, ABP soon realized that a lot of websites rely on these ads for revenue streams. Even more importantly, paid placements “keep the lights on” within the digital ecosystem; allowing users to consume content for free, marketers to get their message out, and publishers to be compensated for their efforts.

So ABP started asking users to identify what they felt was a nonintrusive ad. Using this feedback, they implemented the Acceptable Ads initiative in 2011, which allowed for harmless ads to be viewed as long as it followed ABP’s set criteria. After implementing this plan, users could then choose to view acceptable ads while browsing or continue with ad-free browsing.

In concert with ad tech startup, ComboTag, AdBlock Plus has recently launched their new online marketplace: the Acceptable Ads Platform. What was once simply a set of general guidelines, The Acceptable Ads initiative has now evolved into a platform where all whitelisted ads will be displayed for publishers to potentially add to their site.

The most noteworthy function is the speed at which ads will now be whitelisted and implemented. This new system allows “web publishers to drag-and-drop those approved ads onto their sites, guaranteeing when an AdBlock Plus user arrives on a page, they’ll be shown the approved ads rather than what would have appeared otherwise,” (Tech.Mic).

On paper, ad blocking makes intuitive sense: if ads are less intrusive and more permissive, fewer people will block the ads. However, in practice ad blocking is a little bit more complex…and much more costly.

One study shows that if “ad blocking rates maintain at their current levels—and publishers do little more to combat ad blocking than they already are—they will lose $35 billion by 2020,” (Digiday). This lost revenue is causing online publishers to rethink their plans. Chief Executive of The New York Times, Mark Thompson, spoke in detail at the “Ad Blocking and User Experience Summit” earlier this summer regarding a new strategy. Thompson said that The Times might start banning users with ad blockers completely.

Other publishers may follow suit. Thompson explained that they are “ready and willing to cut off non-subscribers who refuse to add the newspaper to a whitelist in their ad blocking software,” (Fortune). Thompson has also stated that the industry needs to clean up their ads and make sure they’re not overly intrusive or annoying. Even still, Thompson said, “We do not believe that we will ever be able to sustain The Times journalism or The New York Times as a flourishing business without an advertising business of real scale,” (Fortune).

Publishers have also expressed disapproval over the large entity company fee for whitelisting, as well as AdBlock Plus’s newly consolidated power; deciding the fate of ads based on their “secret sauce,” and not transparent criteria as a surefire way to increase suspicion amongst publishers, marketers and users alike.

Source Knowledge president, Patrick Hopf explained, “This is a battle cry for control of what remains of the open web. AdBlock Plus is simultaneously selling an ad blocker to users and an advertising platform to advertisers and publishers. It is essentially an ad platform disguised as an ad blocker.” (Adweek). 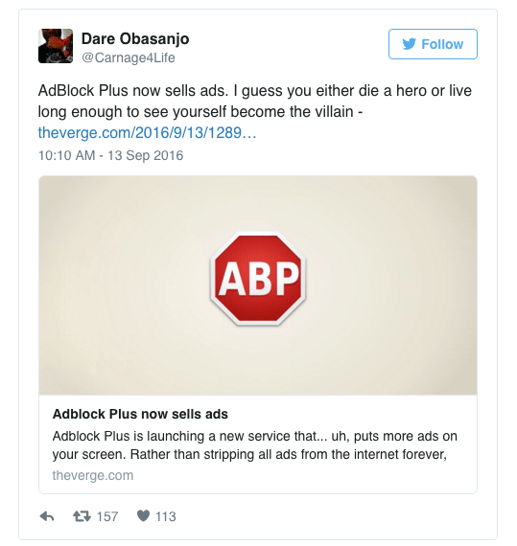 When AdBlock Plus made the announcement about their new Acceptable Ads Platform, it implied that ComboTag would be using the infrastructures of Google AdX and AppNexus (two companies that ComboTag has a working relationship with) to supply the ads to the marketplace. However, neither company knew anything about this, nor did they even know that ComboTag would be joining forces with ABP. Being that AdBlock Plus’s new platform would charge large entity companies an additional fee of 30% of the revenue for whitelisting, the question of heavy-handed business tactics arise.

Since then, both Google and AppNexus have severed all ties they had with ComboTag, explaining that they don’t want to be associated with a business like that (Business Insider).

And not surprisingly, ABP has suddenly changed their tune. Claiming that there was misinformation in the market, ABP now states their new platform will not sell ads, but rather just make whitelisting faster and easier. ABP now posits “The Acceptable Ads Platform is simply a tool that makes it easier for publishers to have non-intrusive ads on their websites. This allows websites, especially small and medium-sized blogs, to benefit from the Acceptable Ads initiative,” (Ad News). These quick changes of facts come a little too close after backlash from Google and AppNexus. Perhaps they’ll mold their statements once again when someone else responds negatively. We can’t be too sure.

So What Does It All Mean?

Whether or not ABP becomes a walking paradox, one thing is for certain—the digital ad space is consistently under attack. From algorithm updates to ‘strictly-business’ decisions, a marketer’s only hope is to develop an agile and multi-channel approach that balances both inbound and direct marketing tactics.;

1. Seek and you shall buy

Unlike retargeting ads (which are based primarily on user tracking a la cookies), search ads are much less intrusive...and much more effective. At a very basic level, these types of ads are run on the premise of keywords being used in search queries. For example, a search query using the keywords “laptop computer” would yield results pertaining to laptop computers. However, a search with the terms “laptop computer 4gb ram under $1000” would yield a markedly different result.

The difference in the KW specificity is where marketers can be strategic in finding more qualified buyers, i.e. the searcher typing “laptop computers” may simply be looking for the general benefits of ownership. However, the searcher looking for a “laptop computer 4gb of ram under $1000” already has a greater idea of what he/she wants and reasonably farther down the path to purchase. Leveraging ad networks such as Bing Ads or the almighty Google AdWords, marketers can create and execute compelling ads based on these KWs to capture the vast amount of searchers interested in their product or service category.

Seeing as display ads (especially the ones blocked by ABP) are predominately shown on websites outside of the brand being marketed, a closed loop ad network is a much more effective way to reach your target audience.

Paid display ad front-runner Facebook, is a great example of a platform that understands the raw power of a closed loop infrastructure. In FB’s user agreement, there are certain stipulations that ensure once you have logged in, you have essentially allowed marketers to fire at will, barraging you with as many ads they have the budget to support. And seeing as Facebook is one of the most engaged with social media platforms (with a top-notch targeting system to match), there is little doubt a user will see your ad and engage with your brand.

The proliferation of “banner blindness” (and cyclical nature of the marketing ecosystem) has led to a resurgence of more traditional marketing tactics. From the personally addressed envelope all the way down to its tactile nature (and surprise factor), DM is one of the last charming formats left. This, coupled with the advances in print technology, make direct mail an attractive choice for marketers seeking the targeting granularity of Google or Facebook, but in the physical world.

In digital marketing, building a considerable email list for consequent marketing initiatives is one of the most valuable tactics for customer acquisition. Email or “digital DM” is essentially the online equivalent of traditional mail; being delivered to a known recipient address in the most direct manner.

Also, implementing a CRM system on your back-end, such as a Salesforce or ActiveCampaign, can help you manage and break out these customer profile segments based on engagement and preferences. Assuming your emails are providing genuine value (and your landing pages are optimized), email marketing can be one of the most effective ways for overcoming the uncertainty of digital paid placement and ad blockers.