Emoji in the Inbox

For those of you living under a rock or still hopelessly attached to RIM’s Blackberry, Emojis have become the new smiley face standard. Gone are the days of using the text-based precursors, such as ":)" to signify happiness (or ":-D" on a particularly good day). Instead, these richly designed “pictographs” can communicate a more robust host of emotions and scenarios, with as little as one character.

After a standout year, from Presidential recognition and nods from Merriam Webster, emojis have finally made the leap from full-fledged fame to fully-functional: marketers are now starting to implement them in email subject lines to drive engagement (read rates).

However, not all that glitters is gold for emojis ambitious push into marketing. Although some research shows that emoji usage in marketing has numerous strategic benefits, their use in email marketing specifically is not yet fully understood. In this post, we will attempt to dissect the benefits (and shortcomings) of using emoji in email marketing, and how direct marketers can capitalize on the craze.

The creation of emojis can be traced back as early as 1998 amongst Japan’s top telecommunication companies. As the nation faced significant overhaul bringing Internet capabilities to mobile devices, these industry leaders vied for a way to communicate more effectively through text, while making emotional intent clear.

Largely credited with their creation, Shigetaka Kurita of NTT DoCoMo developed the first set of emojis to fill that growing communication void. What was originally intended as a distinguishing feature of business instead became something much more socially driven—it became a way for Japanese girls to incorporate “cute” typography in text messages to their boyfriends. And they did just that. And their boyfriend’s acquiesced. And emojis flourished.

Fast forward to 2015 and emojis have completely infiltrated Eastern and Western cultures alike, while reshaping the way we communicate via online and text. And with this comes a whole myriad of potential benefits for marketers who want to talk directly to these audiences.

When it comes to email marketing, the benefits of emoji use are numerous:

Some shortcomings of using emoji in email...

With emoji use in marketing still in its infancy and direct marketers still testing the waters, we have compiled three key takeaways to guide usage in your own campaigns: 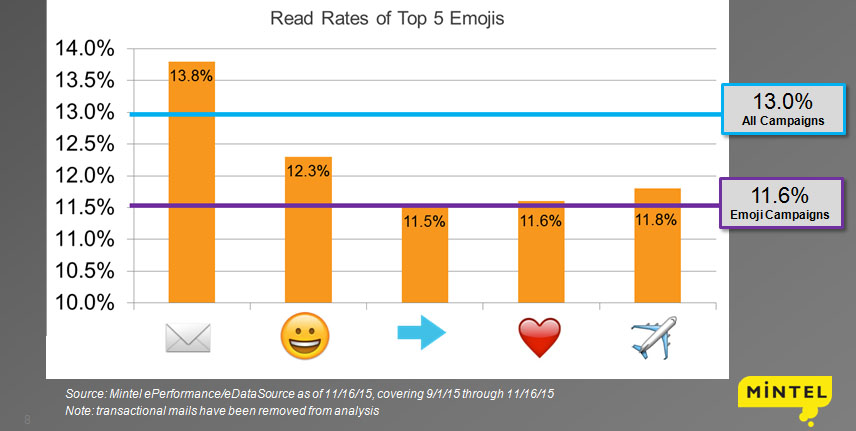 As with all potentially good ideas, taking a strategic approach from start to finish will make all the difference in ultimate campaign success.