A Vote of Confidence: Political Direct Mail's Influence on Millennials

This political race has been very interesting to say the least. From the outrageous comments—to the equally outrageous candidates—the people of the nation seem more entranced than ever. And with voter turnout on the rise (in particular amongst the Millennial segment), it's a safe assumption that this upcoming election could have the most voters, if marketed the correct way.

We know that direct mail delivers the win when it comes to presidential campaigns. And new research from the American Association of Political Consultants echoes an even greater sentiment—that political direct mail is one of the most effective channels for capturing the Millennial vote.

Millennials in the Political Realm 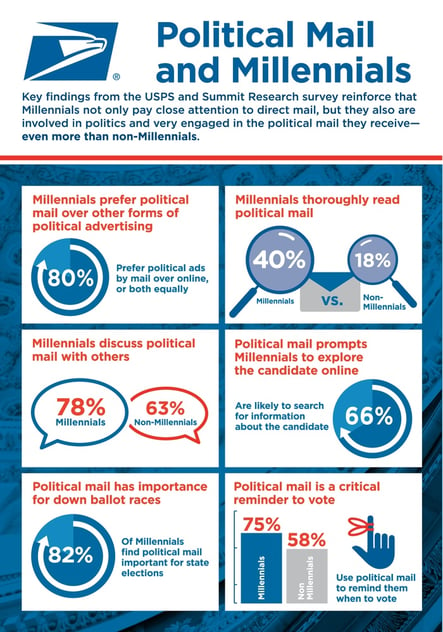 via Campaigns and Elections

If the 2008 Presidential election taught us anything, it was that Millennials are becoming increasingly important in political matters; they are not only slated to have the most purchasing power by 2025, but expect to make up a significant portion of the electorate. Qualitatively speaking, Millennials are a group of people who are skeptical and cynical—if someone is presenting information to them, they’re not going to just take their word for it. There is a prove-it type of attitude that they all share. Being tech savvy, Millennials will also utilize their vast pool of resources to fact-check any kind of statement made in the political arena. And if that isn’t self-righteous enough, Millennials also trust no one—two-thirds say ‘you can’t be too careful’ when dealing with people,” (Pew Research Center).

The good news is that Millennials respond really well to direct mail. Regardless of what the piece is, 36% of people under the age of 30 check their mail daily. Furthermore, 41% of people from ages 22 to 24 and 37% of people ages 25 to 34 open their daily mail immediately. Additionally, 50% of Millennials at least scan their mailpiece and are willing to do something after; and even 40% thoroughly read through the mail (American Association of Political Consultants).

When it comes to political campaigns, 42% of Millennials prefer political ads via direct mail. The political ad piece acts as a strong motivation for Millennials to do their research and form a better opinion—as seen below, political mail is the main driver of candidate awareness. 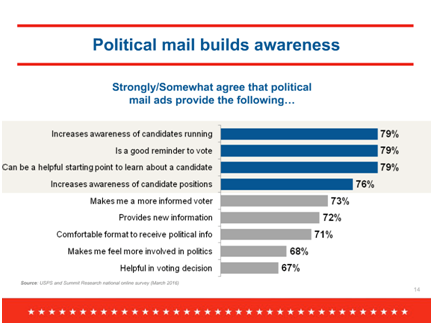 Even though the Millennials are considered to be the “digital generation,” they still value physical mail. In fact, the physical direct mail is a well-known driver of online activity (Exact Target 2011).

Here's the first example from Clinton:

In this piece, even though it’s coming from Clinton, she uses Trump as the visual on the outside; thus enticing Trump supporters to read it. Once it’s opened, there are questions being answered about rumors surrounding Trump. However, these rumors have been tossed around so many times that it just seems like a desperate plea from Clinton. Millennials, in particular, will not be intrigued by this because they’re on social networking sites, they read breaking headlines on a news app, and they’ve heard it all before. There is nothing here that stands out to them to make them alter their vote either way.

Here's another example of direct mail from Clinton: 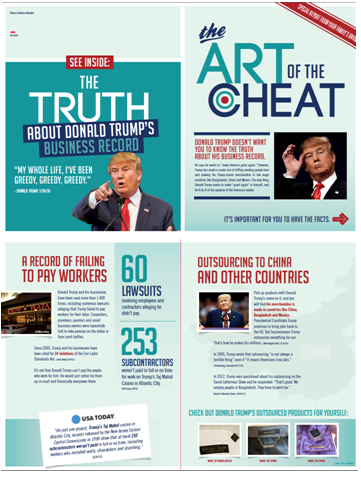 Once again, this piece from Clinton features competitor Trump, front and center. And once again, Clinton is addressing the same rumors; the ones that we’ve all heard a million times and have already formed an opinion about. This piece is a little bit more enticing, visually speaking, and though the content is more detailed, it’s still not strong enough to get Millennials to sway their vote because the information is trite and, frankly, uninteresting.

However, this third example from Clinton is the one that may evoke some emotion from Millennials: 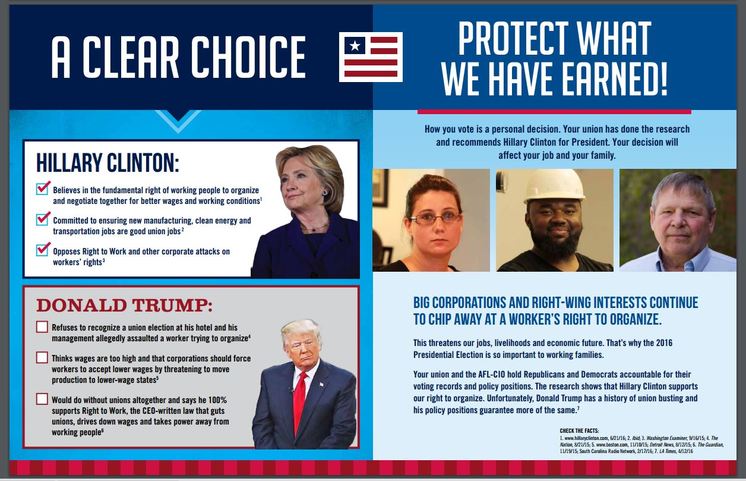 This piece contrasts Clinton with Trump and then depicts one specific issue regarding careers. Millennials care about their future and about their career and earnings. This is content that they feel compelled to read; and it’s not necessarily something they’ve read before. This piece is providing just enough content to spark an interest in a voter for them to research more on both candidates. This is the only piece of the three that Millennials will likely walk away from feeling they need to act.

Bottom line is that your political direct mail can really influence your outcome across the Millennial segment. Each piece has to be up to par to not just grasp the reader’s attention, but to hold their attention long enough for them to read the entire piece. Then, hopefully by the end of the piece, they are sparked to act—whether that be talk about it, go on a website/landing page or even look up someone on social media. If you can accomplish one of those outcomes, you’ve created something worthwhile.

There is a specific way to talk to the Millennial generation. The American Association of Political Consultants explains that “they see a political ad as coming directly from the source without any news bias or filter.” Therefore your approach may be a little different.

The campaign should make the candidate seem realer, more grounded. Instead of a posed picture, make it a candid one. While you’re at it, throw in a reference to something in the pop culture world to show an intimate understanding of what’s happening, not just at a socioeconomic level. 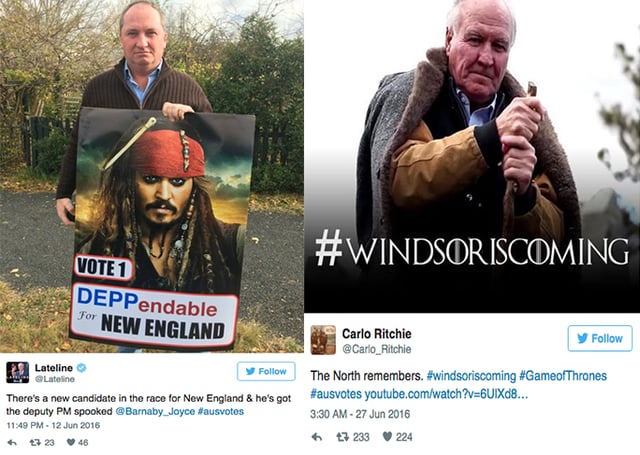 For example, these two campaigns both used their names in relation to a popular movie or a popular show; definitely extracting at least a chuckle from Millennials.

“Remember you are dealing with a generation that believes it is okay to come to an office in a T-shirt and jeans,” (Your Story). While you don’t want to downgrade the candidate’s voice to one that sounds uneducated, it doesn’t have to sound like something that might be in the encyclopedia.

Since Millennials are the digital generation, visuals play an important role in how they grasp information. There should be a healthy text-to-visuals ratio so that no one feels overwhelmed and suffers from “information overload.” More recently, direct mailpieces have even taken cues from traditionally digital tactics, in particular infographics, to help create visually appealing/digestible content.

Millennials are the most diverse group in the country, ethically and socially. Generally, they feel that America needs a moral revolution. This group of people wants to know about the candidate’s charity of choice, how they plan on making social changes, and how to make the world more accepting of differences. Something as simple as a logo-hit on the bottom of a direct mailpiece, showcasing a particular fund or initiative your candidate is aligned with, can mean all the difference in getting a Millennial to act. 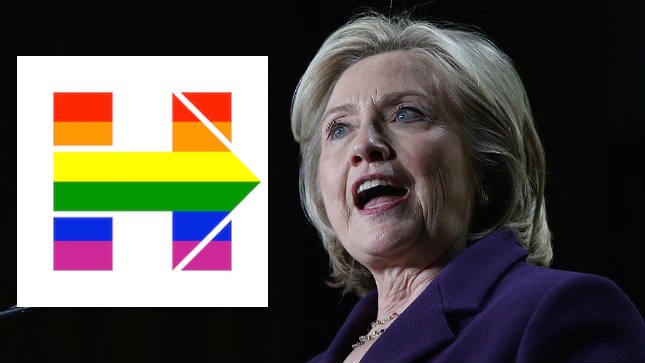 Taking one step further, if there is a handful of social causes your candidate is involved in; build these into your segmentation strategy. Then, leveraging 4-C variable data printing and unlimited creative versioning, you could create truly one-to-one direct mail communications to speak relevantly to each one of those segments.

Whether you're a Republican or a Democrat, a Trump supporter or team Hillary, and whether you love or hate politics; one thing is for sure—direct mail gets the vote of confidence.